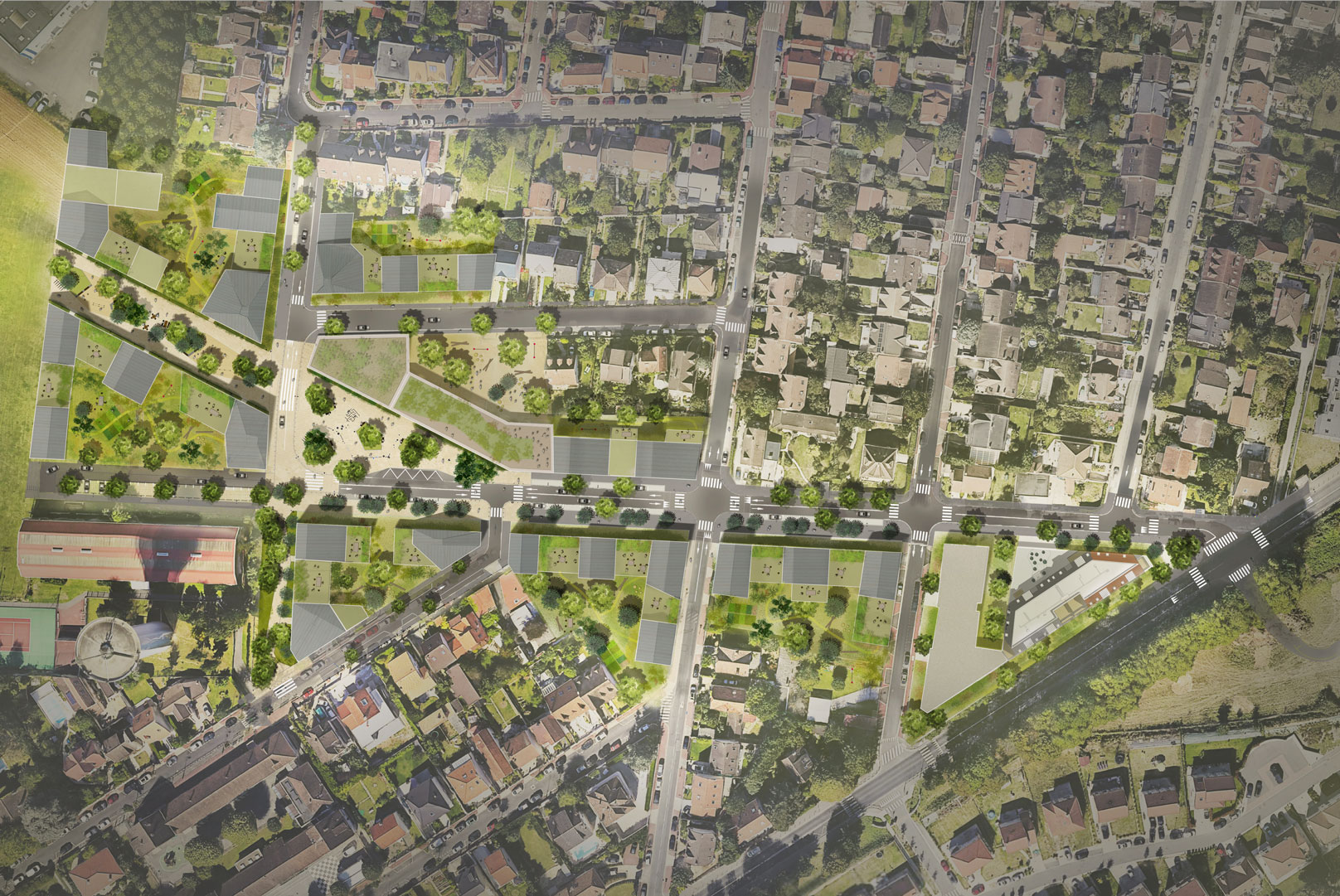 Located in the town of Ormesson-sur-Marne, 20 km from Paris, the Plaine des Cantoux joint development area project covers an area of 3 ha between the Maillarde sector in the north-west, the Golf in the south-east, near the slopes of Ormesson. Following the signing of a Social Diversity Contract in 2016, the State which remained the owner of the former eastern service road, known as VDO, transferred these lands to a public developer, EPAMARNE, which today works in collaboration with the City to carry out various development projects there. 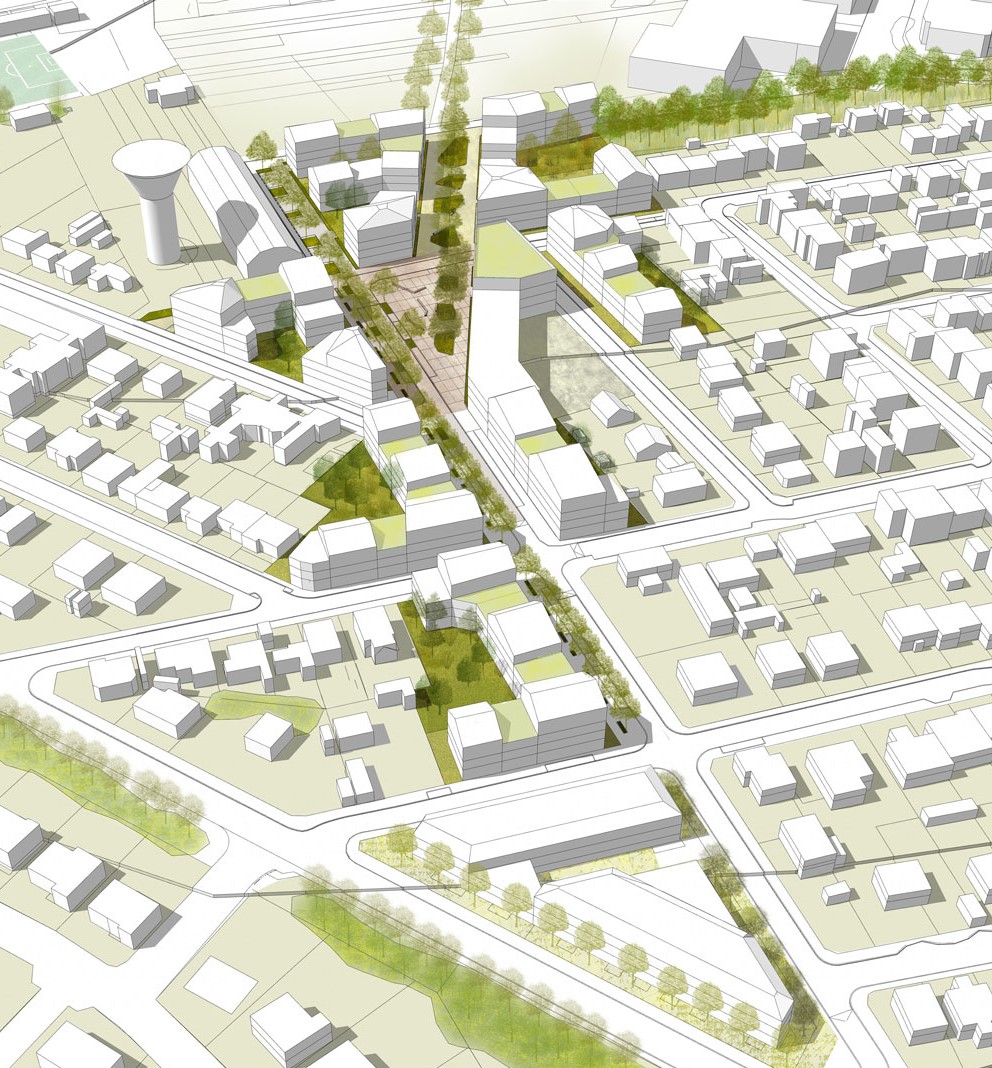 CO-CONSTRUCTION AT THE HEART OF THE PROJECT

Since then, close collaboration between EpaMarne, the municipality and Grand Paris Sud Est Avenir has made possible to co-construct the project with the inhabitants of Ormesson thanks to public consultation meetings as well as to the citizen BIM tool, interactive platform allowing to participate in the design of the project.

Today divided into 8 lots – from A to H -, the joint development area, having received HQE planning certification, meets several criteria :
– Develop housing and a residential route
– Stmulate social diversity in new future operations
– Develop a public equipment program
– Participate in continuities and soft shiftings
– Strengthen the urban and landscape qualities of the sector
– Ensure the environmental quality of the development and future constructions

Also, the collaboration with VIZEA, a consultancy firm specializing in sustainable development, from the start of the study on the environmental and health component, made it possible to integrate their prescriptions into the CPAUPES. 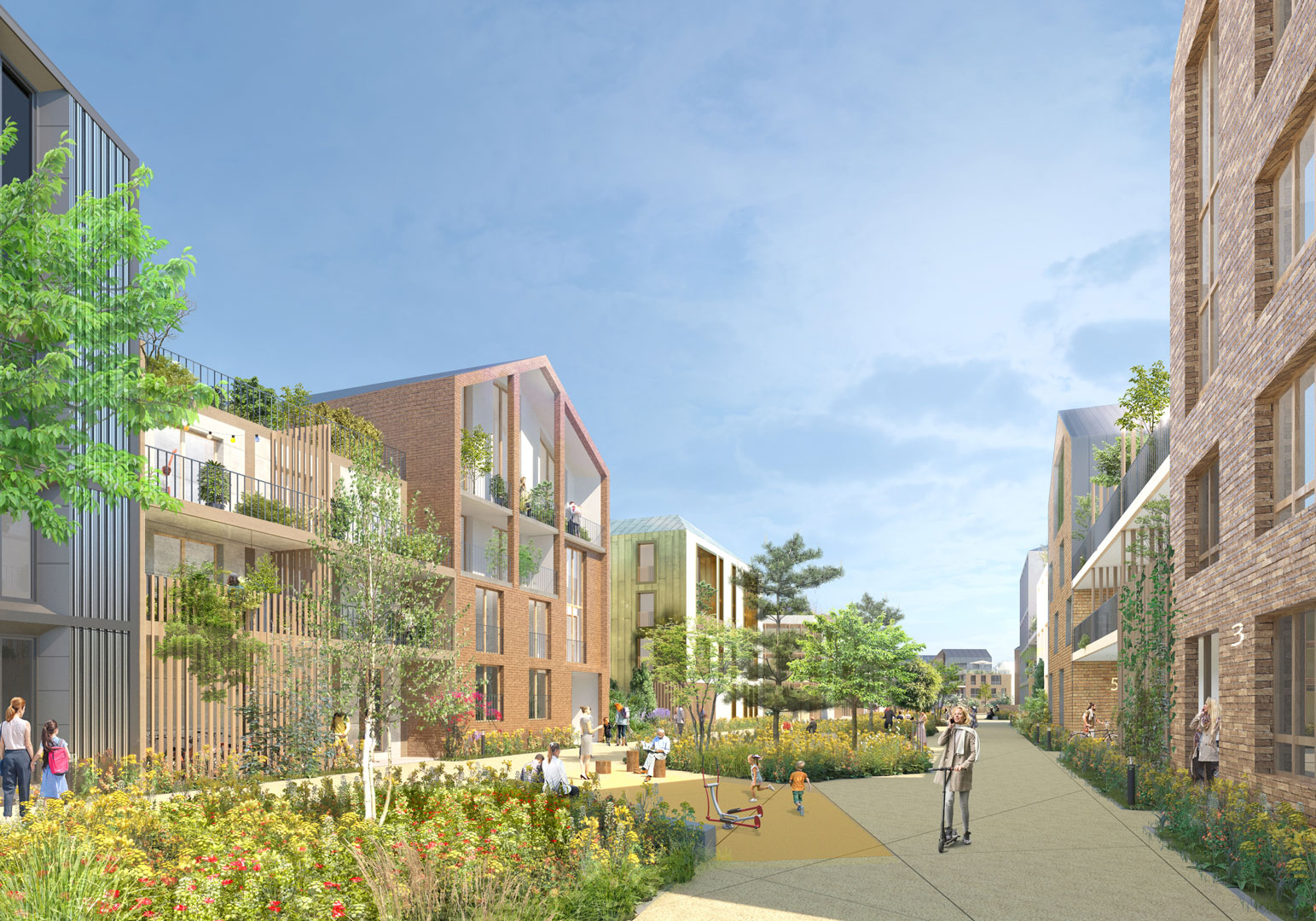 PROGRAMMATIC MIXITY AND NATURE IN THE CITY

Rue des Cantoux, with two-way traffic and lateral parking, is the main road in the Cantoux sector. The public square, located at the intersection of lots B, D and E, constitutes the heart of the district and is closely linked to the newly established school. Pedestrian paths irrigate the neighborhood square, the Maillarde sector, the tennis club and the school. Densely planted, they form plant corridors from the woods to the north of lot A. Finally, the secondary streets connected to rue des Cantoux create a network and provide internal service to the district.

The program has around 360 housing units ranging from T1 to T4, 50% of which are social housing, as well as a 12-class school on lot D. The project advocates architectural diversity with the use of various materials on the facade, an assertive rhythmic verticality and block hearts visible from the street.

Lots A and B will be real meeting places and places of biodiversity for future inhabitants. Along Rue des Cantoux on lots E, G, H as well as along Rue de la Plaine for lot C, private gardens extend the privacy of the accommodation located on the ground floor and participate in the landscape of the street. 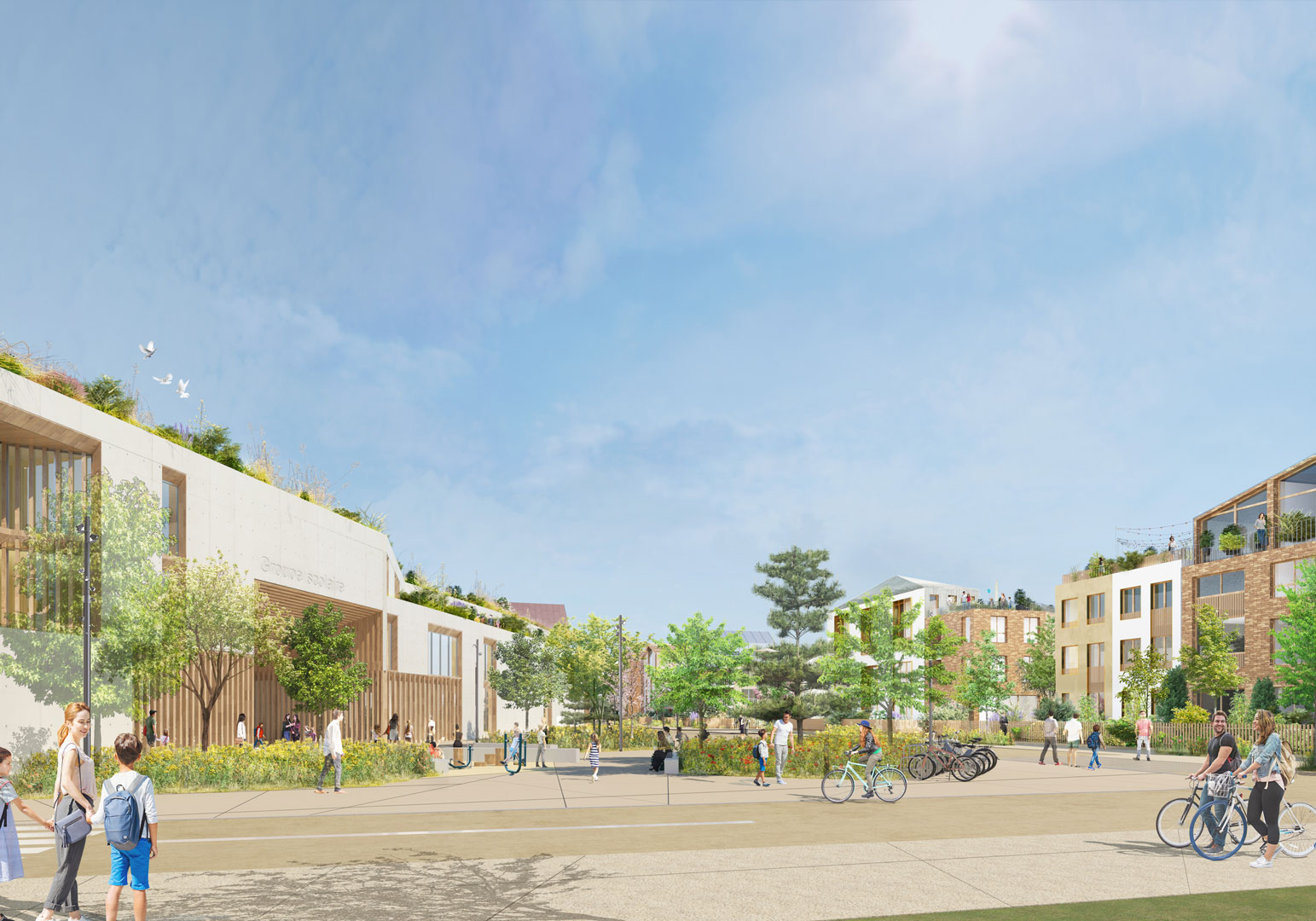 The heights of the projected frame oscillate between R + 1 + roof and R + 3 + roof. Built masses are chiseled and variable throughout the project to best adapt to the current urban landscape. It is a question of densifying while respecting the presence of the existing pavilions with decreasing volumes.

Accessible private terraces will occupy the roof terraces of intermediate buildings, with a minimum of 40% of planted spaces. Finally, collective terraces planted for the use of the inhabitants will be proposed for all the lots. 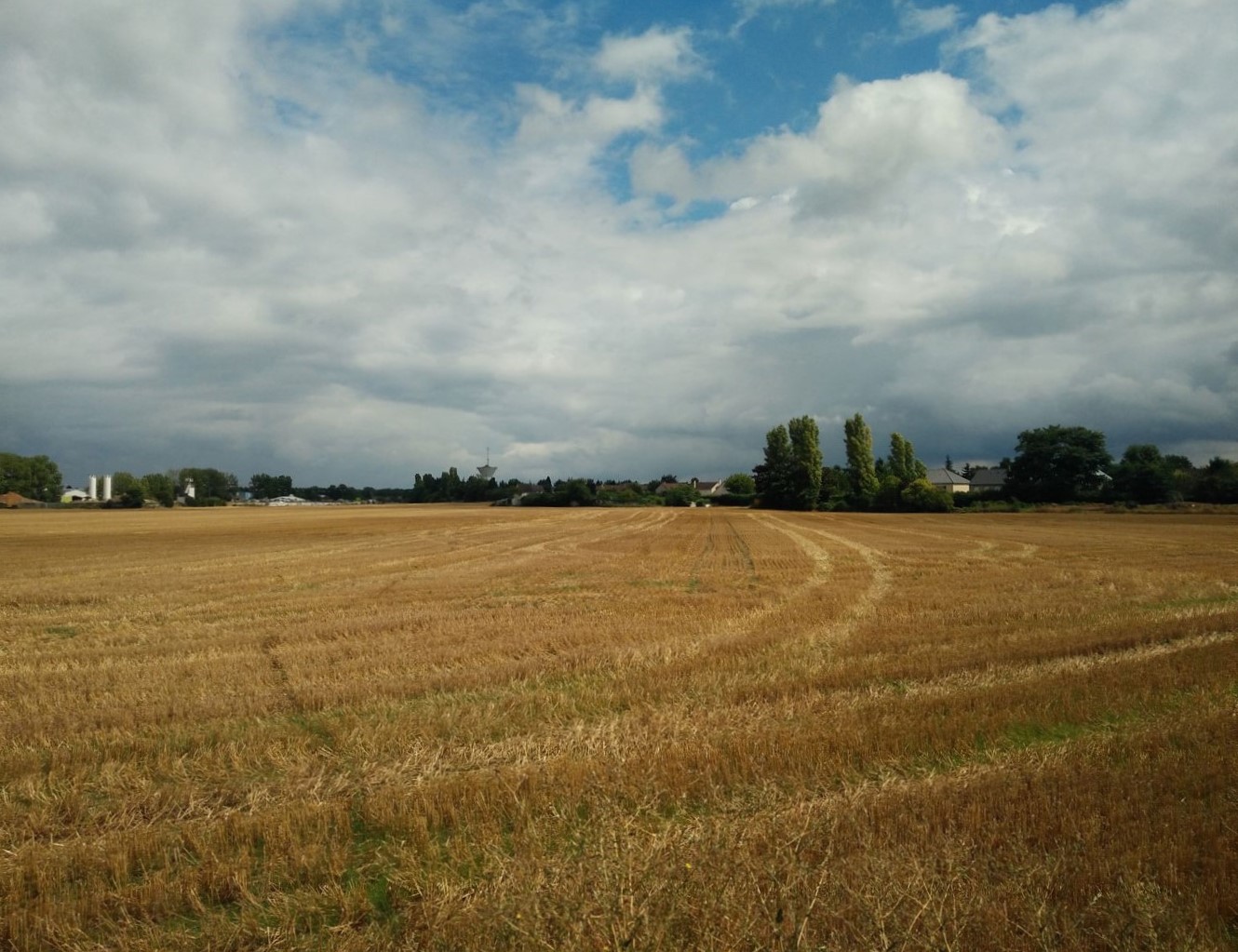